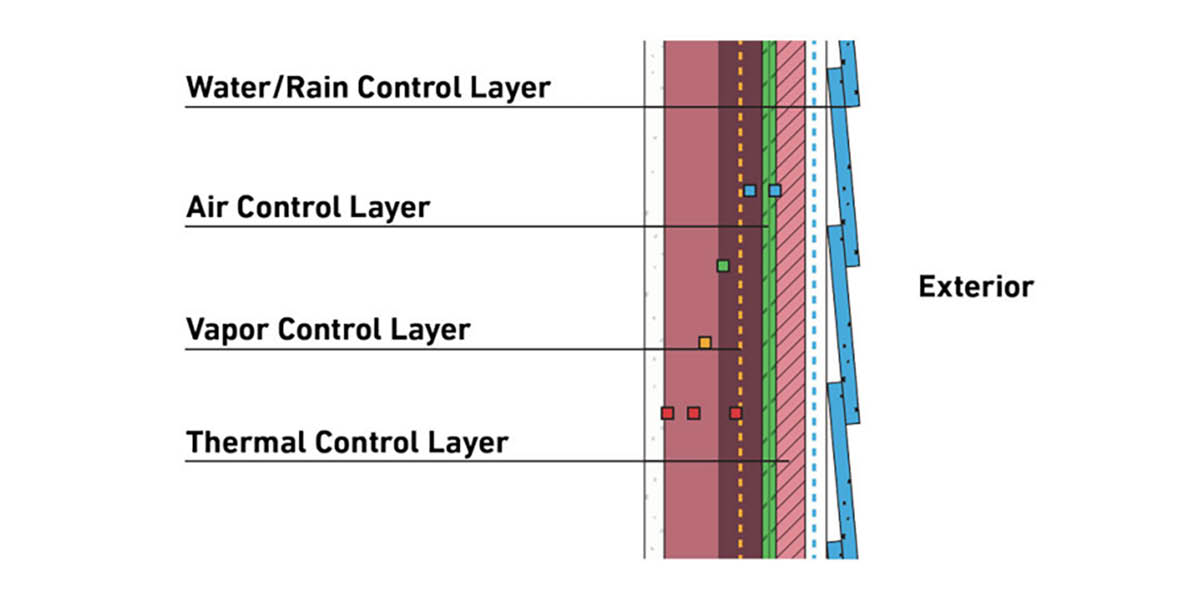 The Four Layers Required in a Building Enclosure.

However, let’s start with – What exactly does each of these control layers do?

“A sheet, spray or trowel-applied membrane or material layer that controls the passage of liquid water even after long or continuous exposure to moisture”.

A water control layer is intended to control the penetration of rainwater into the building enclosure. It is typically the second line of defence (first is the cladding, but the cladding leaks, hence the need for a secondary line of protection) and can be located on top of the exterior sheathing, behind exterior insulation, or integrated into the front face of the exterior sheathing and/or insulation.

To help control the movement of rainwater a drainage plane can be incorporated into or provided on top of the water control layer to help direct water out and away from the building enclosure. This space can be as small as 1/16 of an inch (1.5MM).

It is also recommended to ventilate the space between the back side of the cladding and the front face of the water control layer. Why? Because claddings can store water and this water can be driven towards the building enclosure via an inward vapour drive.

“Air control layers control airflow between a conditioned space an unconditioned space or between units in multi-family and apartment construction”. There are three main reasons as to why it’s important to control air flow across the building enclosure, they include:

An air control layer is almost never comprised of a single material or component. This layer is assembled from multiple components and can transition from different materials or components in the roof assembly to the wall assembly.

The National Building Code of Canada (NBC) and the International Residential Building Code (IRC) set forth minimum resistance to airflow requirements for materials and assemblies. If the material or assemblies meet the performance requirements it is acceptable to engage them in the development of an air control layer for the building enclosure.

“The component (or components) that is (or are) designed and installed in an assembly to control the transfer of thermal energy (heat). Typically, these are comprised of insulation products or trapped gaps filled with air or other gases. One quantitative measure of a thermal control layer is resistance to heat flow (R-value). R-values are limited in that they deal with conduction, one of three modes of heat flow (the other two being convection and radiation) and that their range of applicability is typically limited to materials not assemblies”.

Within the last decade the construction industry has got more serious about the application of continuous insulation (ci) outboard of the buildings structure. Now, yes part of this has to do with the Canadian and American building codes mandating a specific level of ci based on geographical location, either way it’s a movement in the right direction and an excellent method to reduce thermal bridging from structural components of the building (especially steel/metal and concrete!).

“The component (or components) that is (or are) designed and installed in an assembly to control the movement of water by vapor diffusion”. Vapor control layers are the most well known out of the four control layers, however, typically a vapor control layer is the least important and often selected with a vapor permeance that is too low or high. Often, we don’t need to completely stop the flow of water vapor, merely we need to slow down the rate and even more complex, at times, let water vapour out in the opposite direction.

By andylennox|November 28th, 2022|Details, Residential|Comments Off on A Quick Overview Of The Functions of the Four Control Layers In A Building Envelope 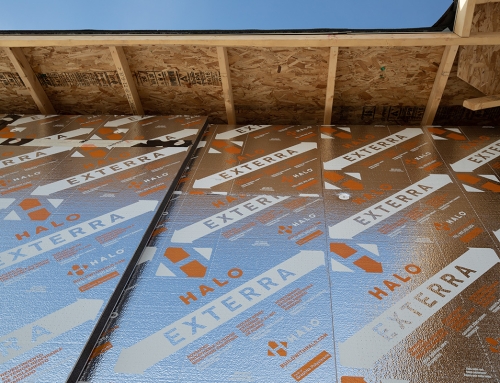 The Building Science Behind: How Exterior Continuous Insulation (ci) Can Help to Manage Condensation in Above Grade Wall Assemblies 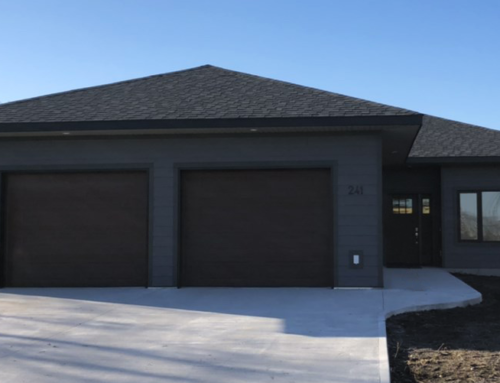